In 1945, there were 4.5 million bees in the United States. Today, there are just about 2 million. It’s been a subtle decline over time, but one that has dramatically accelerated over the past seven years.

Marla Spivak: Why bees are disappearingAnd this should be extremely alarming, given that bees pollinate one-third of the world’s crops.

In today’s talk, given at TEDGlobal 2013, Marla Spivak looks at why bees are disappearing. She highlights four reasons — many related to changes in farming practices — and how they interact to tragic end. But beyond that, Spivak wonders: what do these deaths mean for us given that bees, a species our lives are deeply intertwined with, have thrived for over 50 million years?

“This small bee is holding up a large mirror,” says Spivak.

Dennis vanEngelsdorp: A plea for bees “How much is it going to take to contaminate humans?”

Spivak is not the only TED speaker to express deep concern over the declining bee population. In 2008, the second year in row during which a third of bee colonies were found mysteriously dead, Dennis vanEngelsdorp made “a plea for bees.” It’s a very funny talk, but one that looks at the serious issue of why bee colonies are susceptible to disease. Several years later, at TEDxBoston in 2012, Noah Wilson-Rich looked at the potential of urban beekeeping,

The TED Blog got these three speakers on the phone for a group conversation about the state of bees.

We’re excited to get the three of you together. To start off, I’d love to hear from each of you: what is it that first sparked your interest in bees?

Noah Wilson-Rich: For me, it happened in school. I was pre-med in college, as an undergrad, I think mostly because I really didn’t know all the career options that were out there beyond teacher, doctor, lawyer, fireman and astronaut. So, I was pre-med, and I took this amazing class called “Sociobiology” that was taught by Rebecca Rosengaus, and it just changed my whole trajectory. It opened up this world of social animals and social insects, and then I ended up applying to a PhD program with Philip T.B. Starks at Tufts. That’s where I started working with honeybees. It was the beginning of a great career.

Dennis vanEngelsdorp: For me, it was also as an undergraduate. I was in a horticulture and international agriculture program — I had my own gardening company and I was sure that I was going to run my own gardening company for the rest of my life. I took a beekeeping class, and I remember just being fascinated. We went out and opened the beehives, and I got stung. And there’s a saying in the bee community: You get stung, and it’s in your blood. You know you’re a beekeeper. If I was mechanical at all — if I could use a bandsaw without fear of losing my fingers — I’d be a beekeeper. But I’m better with numbers, so I went the science route. Bees are a passion. I mean you know right away when you open a hive whether this is what you need to be doing.

Marla Spivak: I was also kind of bored and directionless as an undergrad. I picked up a book at the library on bees — and that was it. I stayed up all night reading the book, and by morning I had a career.

NWR: Which book was this?

MS: It’s called Bee’s Ways. It was written by a naturalist, I think in the 1940s. There’s just something in the book that grabbed me, and so I convinced my advisor that I needed to work for a commercial beekeeper. They sent me to New Mexico and I worked for a beekeeper for a semester.

It’s so interesting that all of these moments happened in college.

Marla, in your talk, you suggest that the fascination with honeybees is because, not only are their lives intertwined with ours, but in a lot of ways, they’re like us. Could you speak to the ways that bees are like humans?

MS: I actually think it’s that humans aspire to be like bees. I mean, we live in societies, but their society is a lot more coherent. We look up to honeybees as being very efficient and well-organized, and maybe we think our own society should be more like that. I’ll let the other guys speak to that.

DV: I think it resonates with something very deep in our culture, and even goes back to our ancestors. Here’s this creature, and it sort of demands respect because there’s this aura of danger. And yet, there’s this glorious return. I always imagine that if you’ve never tasted anything sweet, tasting honey for the first time is just sort of nectar from the gods. We’ve evolved with bees, and bees have evolved with us at some level. And they’ve always inspired us. I also think it’s connected with our youth — you know, running barefoot through a meadow and getting stung in the toe. It is a rite of passage. And I think we all understand at some level that if that can’t happen anymore, that we’re diminished.

NWR: I’ve been doing some reading back on the history of humans and bees, especially with honeybees, and it’s interesting to learn about how far back our relationship with them goes. We’ve found the first cave drawings dated back to 13,000 years ago. It’s remarkable — I mean, that is many generations. We’re quite intertwined with them. I mean, we first started domesticating bees in Egypt, in boats and barges on the River Nile for agricultural pollination. Thousands of years ago, I think that was around 2400 B.C.

DV: It is really cool. There’s even a honeyguide bird in Africa. You can walk through the savannahs of Africa and this bird will land in front of you, and lead you to a beehive to collect some of the honey, and leave some of the honey for it. It does this for honey badgers too, and it does it for people. That association is long enough that the bird has evolved a behavior to help communicate where hives are. 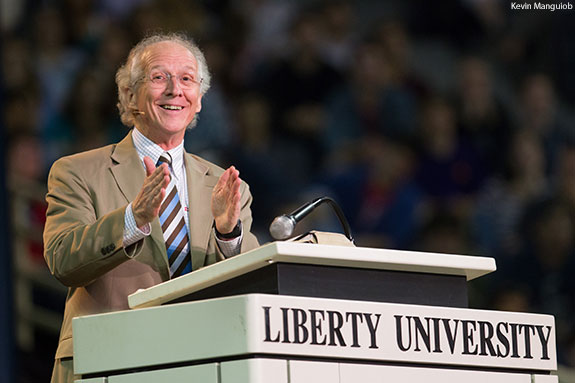 Theologian and Pastor John Piper speaks at Liberty University for the first time, kicking off the university’s biannual Global Focus Week during Convocation.

Liberty University’s biannual Global Focus Week kicked off at Monday’s Convocation with messages from theologian and Pastor John Piper and Naghmeh Abedini, wife of Iranian-American pastor Saeed Abedin who is imprisoned in Iran.

Piper is the founder of desiringGod.org and is the chancellor of Bethlehem College and Seminary. He also served as senior pastor at Bethlehem Baptist Church in Minneapolis, Minn., for 33 years and is the author of more than 50 books. This was his first visit to Liberty.

Piper spoke on Hebrews 10-13, challenging students to embrace the opportunity to suffer for Christ and emphasizing the importance of being satisfied in Christ.